Although Bryan Ferry established a considerable work ethic early in his career – three albums written, arranged and recorded in 1973 – The Beatles set a sizable precedent in 1965 with the Tamla Motown influenced McCartney track ‘You Won’t See Me‘: adding the song as a late contender for Rubber Soul, ‘See Me‘ was recorded during a single thirteen-hour session that saw the Beatles finish three complete tracks (‘Girl’, ‘Wait’, and ‘I’m Looking Through You’) and only requiring – by necessity – two passes at ‘You Won’t See Me’ to get it in the can. (The rush-recording did impact quality control – ‘See Me’ is unique among Beatles songs in that it changes tempo slightly but noticeably, moving from 119 to 113 bpm over the course of the track).

Like everyone else born in the 20th century, The Beatles are mecca when it comes to influence, range of style, and sheer breadth of songwriting ability. Ferry has openly acknowledged the influence the band had on his music (“the best films were American films, the best stars were American stars… and the best music was American, until The Beatles came along” – Disc),  and he would go on to record a number of Beatle tracks – It’s Only Love; She’s Leaving Home; and of course John Lennon’s ‘Jealous Guy‘ – but the relationship for Ferry was never an easy one: as a band, The Beatles were so multi-talented that when it came to artists covering them, the plethora of vocal options presented a problem to outsiders: am I Paul; or John; or George? And am I all three during the harmonies? Joe Cocker was able to overcome this embarrassment of riches with his cover of ‘A Little Help From My Friends‘: all he had to do was appropriate Ringo’s expressive baritone. Covering Bob Dylan is an opportunity; covering Ella Fitzgerald is a challenge; covering a mid-period career-peaking tenor-sweet Paul McCartney is near on inconsolable.

Ferry’s version of ‘You Won’t See Me’ is unfortunately one of the least successful ready-mades on These Foolish Things. Starting with a high-in-the-mix sound effect, an engaged telephone that sounds half-hearted and confusing (certainly sounds dated, even for 1973 – when did phones ever sound like this) and not nearly as effective as Blondie’s urgent ring at the beginning for Hanging on the Telephone (I’m in the phone booth, it’s the one across the hall/If you don’t answer, I’ll just ring it off the wall). Ferry’s intention for the gimmick is to have it draw attention to the first line of the song – When I call you up/your line’s engaged – but something is horribly wrong: his voice is weak and pleading, almost irritatingly timid. On first listen you take a mental note to never answer the phone while this guy’s on the line, no matter how long it rings.

Ferry tries to cut through to the heart of ‘You Won’t See Me‘ by enunciating the lyric with new emphasis – his timing is purposely out-of-sync with the original, but the effect is disjointed, providing little reward or preparation for what follows next – the complete abandonment of the song’s key motif – the climbing and repeated vocal refrain you-/won’t-/see-/-me//you-/won’t-/see-/ me etc. Ferry kills the signature motif by replacing it with piano, so we get plunk-/plunk-/plunk-/plunk. It’s like recording ‘(I Can’t Get No) Satisfaction‘ while relegating the famous signature guitar line to glockenspiel. Ferry’s attempt is in keeping with Anne Murray‘s embellishment of her version with fuzz guitar (bzzz/bzzz/bzzz/bzzz) – but at least Murray’s version is funky and in keeping with the original Tamla Motown vibe.

More comfortable with love as an ideal, what’s really missing from Ferry’s version of ‘You Won’t See Me‘ is the nasty undercurrent of the original, provided by Paul McCartney in all his Liverpudlian male-dominant glory: in the opening lines he addresses, nay, scolds the woman by telling her to “act her age” – a position that is hilariously hypocritical given that, if the song really is about his split with Jane Asher, then McCartney screwing behind Asher’s back between 1963-1968 (!) is just what the little woman was expected to put up with, Beatlemania or not. McCartney discussed the song in 1994:

As is one’s wont in relationships, you will from time to time argue or not see eye to eye on things, and a couple of the songs around this period were that kind of thing… I would write it out in a song and then I’ve got rid of the emotion. I don’t hold grudges so that gets rid of that little bit of emotional baggage…

Perhaps this is why Ferry presents such a timid reading of the track: although capable of being a surly Northern male himself  (I hope something special will step into my life/Another fine edition of you), Ferry rarely sticks the boot in in his songs; his MO is wit and repartee, while The Beatles are quite happy to say I’d rather see you dead, little girl/Than to be with another man. The churlishness of some of the lyrics on Rubber Soul are rightly forgotten in the rush to enjoy the brilliant sunny optimism of the music.

Overall then, Ferry falls pretty flat on this Beatles track, a misstep he would easily recover from with his later versions of  ‘It’s Only Love‘ (1976) and ‘Jealous Guy‘ (1980). Indeed, the Let’s Stick Together cover of ‘It’s Only Love’ soars in comparison to ‘You Won’t See Me’, full of confidence and deft keyboard touches, warm to the touch for those open to the invitation. Even a majestic and inventive guitar solo from Roxy Music guest Phil Manzanera at 1:18-1:46 cannot muster the heavy-lifting required to save ‘See Me’. We might consider perhaps that Ferry felt more in the skin of the looser interpretive strengths of John Lennon than the precision beast that was Paul McCartney in full flight – the tenor vocal and backing harmonies alone making this minor Beatles track fly higher above its station than it perhaps deserves. 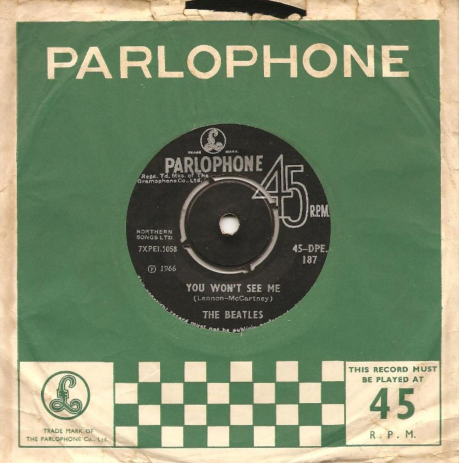 Next: ‘I Love How You Love Me’ – Phil Spector returns with a classic!